Spotlighting philanthropists in our community: Lawson-Hamm family’s multigenerational giving nurtures the next generation of trailblazers

The first chapter of one of Canada’s most remarkable philanthropic stories starts at World War II’s end. It was then that a young Frank Lawson (1891–1984) saw an opportunity to make a difference in the lives of young people. Career Counselling was a relatively new idea at the time, and Frank was immensely inspired by the work of its founding father, Dr. Gerald P. Cosgrave. Following his footsteps, Frank volunteered as Chairman of YMCA’s Counselling Service in its second year.

Through his drive and personal philanthropy, he began to promote its importance and champion the establishment of career centres at several universities. Frank established The Counselling Foundation of Canada in 1959.

Today, standing behind the Foundation are the Lawson and Hamm families, with four generations dedicated to helping people live purposeful, productive lives. They’ve long supported the YMCA  of Greater Toronto and have spent decades giving back, in various roles, through the Foundation and other charities.

When he passed, Frank left the bulk of his estate to The Counselling Foundation of Canada, ensuring his family’s capacity to fund transformative change across the nation. “There’s no question we inherited a formidable legacy from my father,” says Donald Lawson. Donald went on to provide exemplary leadership and counsel as Chair of the YMCA of Greater Toronto’s Board in 1968. He set our YMCA on the course to become a sustainable and impactful charity. “It took me a long time to realize that the genius of the YMCA was the influence of one person on another,” he explains. “Those experiences were a really important part of my own development.” Donald’s legacy of civic responsibility has been personally rewarding. “I’ve had three careers: one in business, one in philanthropy, one in volunteerism,” he says.

Donald’s sister, the late Jean Hamm (1923–2018), was also a visionary philanthropist, who acted as Director and Vice-Chair of the Foundation. “Like her father, my mom dedicated her life to the service of others. She was always engaged in volunteerism throughout her long life,” says Jean’s daughter, Shirley Hamm. Jean championed the outdoor centre, Cedar Glen, which then belonged to the United Church. Realizing Jean’s vision, the Foundation donated the centre to the YMCA of Greater Toronto. 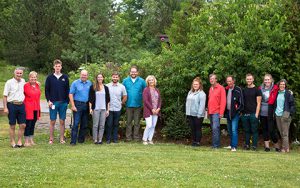 Today, the YMCA Cedar Glen Outdoor Centre enables 25,000 children, youth, and adults annually to connect to  nature, learn new skills, and have fun. “My mother lovingly gave hours, days, and years to Cedar Glen. She believed that outdoor education offers a powerful and transformational experience for youth and adults,” says Jean’s daughter, Barb Mason. “I’m convinced that Cedar Glen, as it exists today, is what she always envisioned.”

“My grandfather, father, and aunt accomplished a lot — they taught us that to whom much is given, much is expected,” explains Donald and Lorraine’s son, Douglas Lawson (current Foundation Board Chair). “Their substantial accomplishments are something to be proud of and to live up to.”

Today, with Donald’s son, Bruce Lawson, at the helm as current President & CEO, the Foundation continues to invest in an ever-broadening range of innovative programs that benefit youth, newcomers, young families, individuals experiencing poverty, Indigenous peoples, and many others.

The YMCA of Greater Toronto is honoured by its meaningful partnership with The Counselling Foundation of Canada. Thanks to their remarkable generosity, the YMCA established the Donald G. Lawson Leadership Development Fund to mark Donald’s remarkable legacy and retirement as Past Chair of the Foundation Board. The Fund ensures YMCA staff have opportunities for continuous learning. The Foundation also made an endowment to establish the Jean Hamm Leadership Development Scholarship Fund for young women attending the YMCA Cedar Glen Outdoor Center as leaders in training.

“Ultimately, I hope we can look back and see that what we took over became much bigger than we found it,” says Douglas. “By doing so, we’ll have accomplished our mission.”